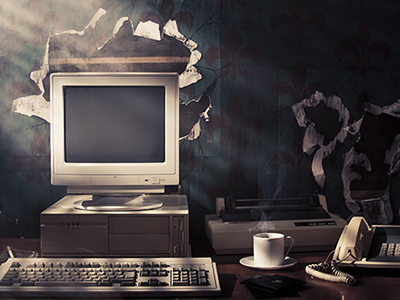 Fifty years ago today IBM’s iconic industrial System 360 mainframe powerhouse made its debut. The “Big Iron,” one of the first mass-marketed server systems ever, made it possible for many of the world’s biggest institutions and corporations to centralize, simplify and scale their massive daily data processing operations.

In honor of IBM’s System 360 golden anniversary, we thought it would be fun to quickly look back on the ways the mainframe’s smaller, more practical computer descendants — the trusty PC, the humble laptop, and an increasingly smarter array of mobile devices — have forever changed how we work, for better and for worse.

Here are four ways computers, in all their various awesome, nerdgasmic forms, have permanently altered business and how we worker bees get it all done (or not):

Related: 10 Fascinating Facts About the World Wide Web on Its 25th Birthday

The Good: Increased worker productivity should lead to more output and higher profits, in theory at least. And more money is never a bad thing.

2. Less talk, more action.
In-person meetings and gabfests have gone the way of Facetime and Skype. Thanks to email, texting, apps and the internet, workers don’t need to actually talk to each other face-to-face any more. We can solitarily toil away at our desks (or from wherever in the world we snag a Wi-Fi connection, even at the beach, if we’re lucky) and text, email and instant message (IM) each other instead. Or Snapchat or Facebook or tweet one another… and the list goes on.

Related: 4 Ways to Stop Smartphone Users From Using Their Phones During Meetings

The good: Less time spent chit-chatting by the water cooler or gabbing in meetings gives us more time to spend, you guessed it, working. Also, fewer moments spent together in-person cuts down on office gossip and drama, both of which are toxic timesucks we’re happy to see (and hear) less of.

The bad: Face-to-face meetings and discussions are often the birthplaces of innovation, whether they unfold at your desk, in the breakroom, in the conference room or wherever. Too many physical and verbal communication nuances and contextual clues can get lost in text translation, some that arguably even Facetime can’t adequately capture.

3. More distraction, less action.
The internet, which we wouldn’t have without a global network of computers, is an infinitely interesting shiny object, begging to pull us away from our work and splash our feet in its unending deluge of diversions.

According to recent research, 64 percent of employees waste up to five-plus hours(!) of on-the-clock time on non-work related websites (like Google, Facebook, LinkedIn, ESPN, YouTube, to name a few) every day.

For those of us who do hours of research on the web for work every day, it takes a tremendous amount of focus and self-discipline to stay on-task and produce results.

The good: We can’t think of an upside of blowing off your work to slack off on the web, outside of perhaps networking with key business contacts on LinkedIn in ways that benefit your company, preferably its bottom line. Even then, it’s a stretch.

The bad: Once you fall down a distraction vortex online, it’s tough to dig yourself out. Lost productivity leads to less profit. Not good.

4. Getting to the PowerPoint.
Presentations are nothing new in business. However, computers made it possible to blend audience-wowing graphs, flow charts, bullet points and other bells and whistles into our business speeches like never before, specifically with a huge leg up from PowerPoint.

Related: Avoid the PowerPoint Trap By Having Less Wordy Slides

The globally popular presentation application, which was originally designed for Apple computers and that Microsoft bought for $14 million in 1987, officially launched in 1990. Presentations have never been the same.

The good: Computer-aided presentations help us better visualize and communicate our ideas to co workers, colleagues and target markets. They help people see the big picture.