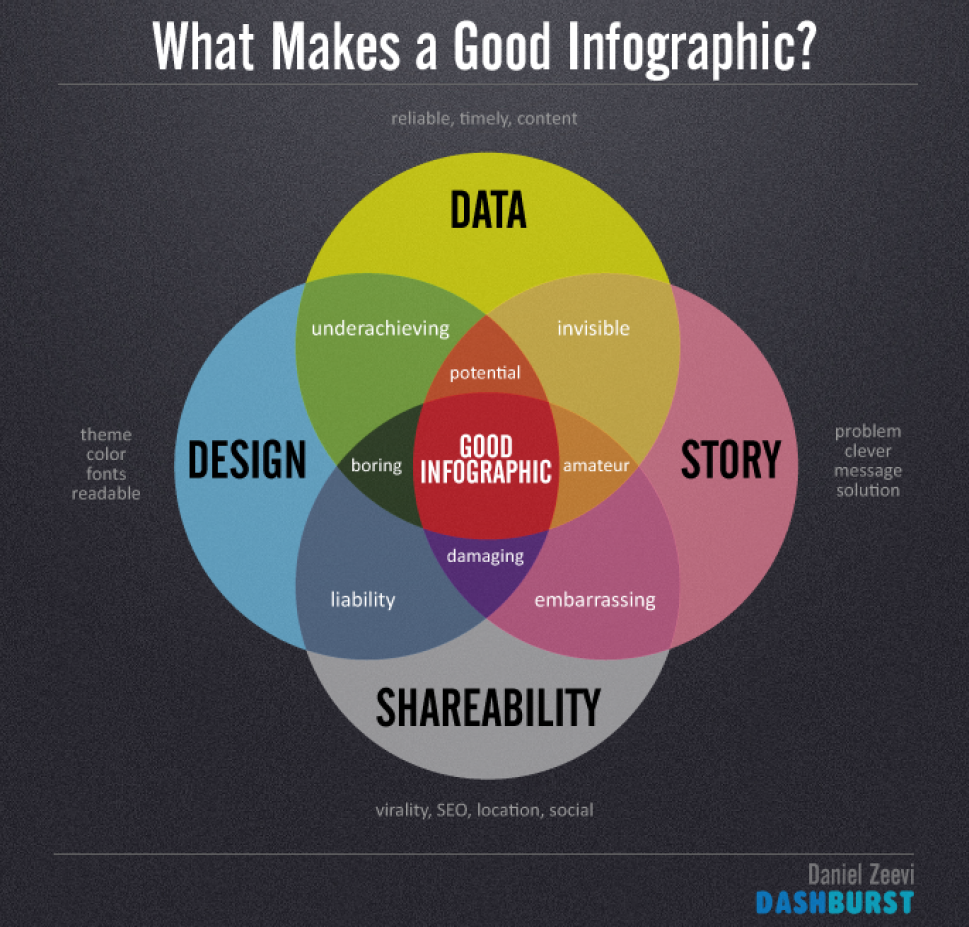 Rise of the infographic and the goldfish attention span…

You can’t click through to a website without seeing an infographic these days. They’re colourful, clever, and deliver information with a punch. But is there more to their efficacy? Are consumers dumbing down?

“Draw me a picture and I’ll understand it better than if you were to write me a paragraph” is replacing “a picture’s worth a thousand words” as the running adage of the 21st Century. Because if you’re looking for information, there’s no doubt you’ll find it on the internet. But with people waking up to the fact that we process information in visual form better than we do as text, you’re more likely to make sense of and identify with the content you see pinned as an image somewhere than if you were to make your way through the pure text form. And while infographics provide a fascinating way to present or graphically represent specific content in an appealing way that keeps many a graphic designer in business, it’s their visual appeal that makes them an effective way to communicate with consumers.

Especially as they’re becoming popular to set aside and read offline, with the increasing intention of taking our online reading offline.

But why are there so many infographics available at the moment?

Visuals are the way to go when sharing information

Carla Gontier, head of social media at Hello Computer, explained at the recent October Bright Day talk that most people only have an eight-second attention span, so you have to catch them fast. As a result we’re becoming increasingly image-centric, so need to use new platforms and use shorter messages.

Christopher Smith, MD of Sha-Izwe Communications, says it’s largely due to this ‘goldfish’ attention span and the attraction of the visual over the written that infographics are successful in today’s information-saturated age.

Irish Apps latched onto this notion. It’s an app development company specialising in iPhone and Google Android app development. The Irish Apps team put an infographic together because they like to stay up to speed on content-related to apps – as do we – and thought that creating some content about the background of some of the more famous app ‘gurus’ would be of interest.

I spoke to Cathal Greaney, the founder of IrishApps.org, to find out more about what went into creating this infographic about app developers.

Slick smartphones and the clever people who build apps for them

Greaney explained that smartphones are ubiquitous in today’s world. The proliferation of apps today means that there is practically an app for every interest and sector, ranging from leisure to business use.

So who are the clever folk who have realised this and jumped on the app-creating bandwagon before the wheels fall off? Well, there’s a 17-year-old who made $30 million from an app he created and sold to Yahoo, where he now works, and another app developer who decided to shut down the incredibly successful mobile gaming app that was earning $50,000 a day… You can see them in the colourful, interesting bit of the infographic I inserted to the right.

You can also click here for a reminder of the infographic I found out more about last month – “Using hidden messages to give brand logos some ‘Oomph'”, and if you’re still not convinced, click through to this (ironic) infographic on why infographics make great marketing tools.